All the Same? (A Guest Blog by Craig Schnarrs)

All the Same? (A Guest Blog by Craig Schnarrs)

Survey devices, those engineered specifically for performing wireless site surveys, often use higher quality chipsets than those in access devices (or simply different qualities). The result is varying receive sensitivities for different devices. This guest blog post provides an overview of how to deal with this issue from one wireless expert's perspective.

I'm working on a warehouse wireless remediation project and there are over 100 warehouses across the United States. The warehouses range in size from 50k square feet to over 1.2 million square feet. The devices in use range from the newest tablets to decade old barcode scanners. Management is concerned because the last time this was done, the money got spent, the surveys were done, the maps were green, but the devices still had issues with connectivity.

The problem is that all the devices were treated as equals when in fact all the devices see the Wi-Fi differently. Another reason is the Ekahau Sidekick has better receive sensitivity than the client devices being used by the workers in daily production. This had the effect of making the maps green and giving the illusion of better coverage. To address this issue, this is what needs to be done: Before starting a wireless survey, compare the receive sensitivity of the wireless client with the Sidekick. Next, document the delta between the devices. This will be used later on in the report creation phase. The Sidekick will record RSSI at higher levels than a client device. In order to compensate for this difference in readings, collect RSSI from other wireless client devices in the same environment and compare them with the readings taken from the Sidekick.

There is a need for WLAN device calibration, but there's no economical way to accomplish it. Primary reasons why Wi-Fi flourishes are its low cost and simplicity. If we understand that RSSI and CCI are relative to the receiving device we can create a plan to compensate, not calibrate, the WLAN client devices. Every device is different, even the same device from the same manufacturer. In addition, all RF environments are different. These differences can't be corrected but they can be compensated for. A WLAN NIC is not calibrated, it's stable, and it's used for making a measurement against other devices in the network. The average of these measurements is used in the WLAN client device compensation process.

While It is not economically viable to calibrate a wireless client device we can compensate for the differences between the devices. Before starting the process, move the client device to a location close to the RSSI threshold selected for the RF design. This is typically somewhere between -67 and -65 dBm, but will vary based on a large number of factors. Position the device and the Sidekick as close to one another as possible for similar readings. Collect readings from the RSSI cutoff throughout the facility before the pre-deployment survey or post-deployment validation, making sure to move around to a few locations with different environmental conditions. The graphic below illustrates some of the factors involved in the behavior of each wifi device. Not all devices will use all choices, this is usually highly proprietary to each manufacturer. 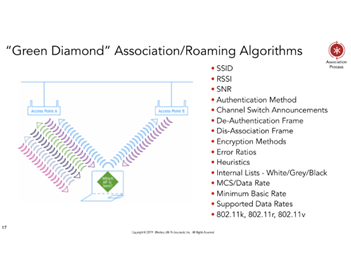 Here is an Ekahau heatmap of a 420k Square feet warehouse showing the 2.4ghz Wi-Fi as viewed by the sidekick at -67dBm: 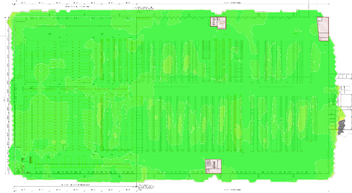 Here is the same exact building as viewed by a Zebra ET55 Tablet: 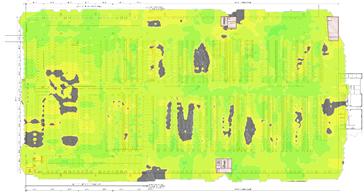 And here is the same exact building as viewed by 1x1 802.11n barcode reader: 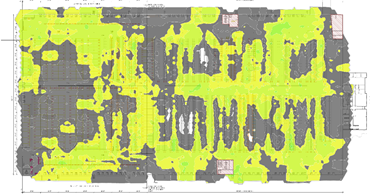 The next question is will the above devices work given the signal differences? The answer is does it meet the requirements? The barcode scanners signal is vastly different than the Sidekick. Ekahau Pro released an option to provide a "device offset" to help visualize how the RF looks to different devices.

The website www.rssicompared.com was created with the intent of determining the offset ranges for various devices out there using a consistent testing process. 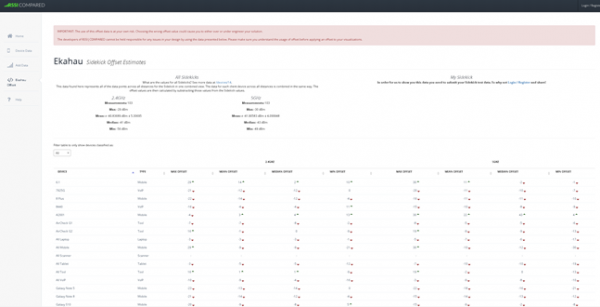 In conclusion, due to the variances of sensitivity on the different client devices the design was engineered to meet the requirements of the least capable yet most important device in this situation, the 1x1 barcode scanner. After each warehouse was completed, workers were asked for feedback. The information received was that everything was working a lot better and faster. This whole exercise saved enormous amounts of time, money and frustration. I look forward to the next warehouse and the next challenge knowing that all wireless devices behave differently and how to compensate for these differences.