Why Does the OSI Reference Model Matter?

Why Does the OSI Reference Model Matter?

A description of the Open Systems Interconnection (OSI) model, why it's important, and an overview of its uses within the wireless industry.

The Open System Interconnection (OSI) model has defined the common terminology used in networking discussions and documentation. This allows you to take a very complex communications process apart and evaluate its components.

While this model is not directly implemented in the TCP/IP networks that are most common today, it is a valuable conceptual model that helps you to relate different technologies to one another and implement the right technology in the right way. You will find references to the OSI model throughout vendor literature from vendors and also in our certification preparation materials, so it is important to understand what these references mean.

According to document ISO/IEC 7498-1, which is the OSI Basic Reference Model standard document, the OSI model provides a "common basis for the coordination of standards development for the purpose of systems interconnection, while allowing existing standards to be placed into perspective within the overall reference model." The model is useful for new standards as they are developed and for thinking about existing standards. One common way of using the OSI model is to relate the TCP/IP protocol suite to the layers of the OSI model. Even though TCP/IP was developed before the OSI model, it can be placed in perspective in relation to the model.

NOTE: You can download the OSI Basic Reference Model document at the ECMA website located at http://www.ecma-international.org/activities/Communications/TG11/s020269e.pdf.

The layered model allows for abstraction. The higher layers do not necessarily have to know how the lower layers are doing their jobs. In addition, the lower layers do not necessarily have to know what the upper layers are actually doing with the results of the lower layers' labors. This abstraction means that you have the ability to use the same web browser and HTTP protocol to communicate on the Internet whether the lower-layer connection is a dial-up modem, a high-speed Internet connection, or somewhere in between. The resulting speed or performance will certainly vary, but the functionality will remain the same. 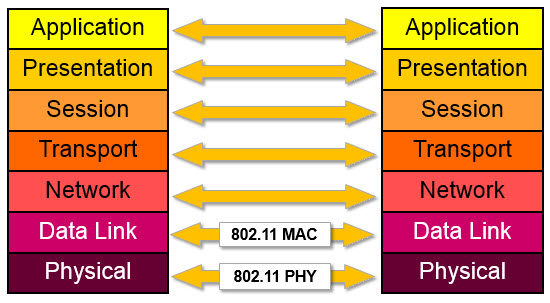 Figure 1 illustrates the concept of the OSI model. As you can see, data moves down through the layers, across the medium, and then back up through the layers on the receiving machine. Remember, most networking standards allow for the substitution of nearly any Data Link and Physical layer. While this example shows a wireless connection between the two machines, it could have just as easily been a wireless connection using the IEEE 802.3 and IEEE 802.2 standards for the descriptions of the Data Link and Physical layers. This example uses the IEEE 802.11 standard and the IEEE 802.2 LLC standard (a layer within the Data Link layer) for the lower layers. The point is that the most popular upper-layer protocol suite, TCP/IP, can work across most lower-layer standards such as IEEE 802.2 (Logical Link Control), 802.3 (Ethernet), 802.5 (Token Ring), 802.11 (Wireless LANs), and 802.16 (WiMAX).

Figure 1: The OSI Reference Model
As you begin your study of Wi-Fi, start by memorizing the OSI model. I recommend that you read through the standard document (link provided earlier in this post) and not just memorize the names of the layers. Then, you will know what the primary services are at each layer. The following videos are also helpful in understanding the OSI model:

Editor's Note: This post was originally published in December 2011 and has been updated for accuracy and comprehensiveness.

0 Responses to Why Does the OSI Reference Model Matter?