Guest Blog: Life After the Red Pill (or, CWNP & Me) 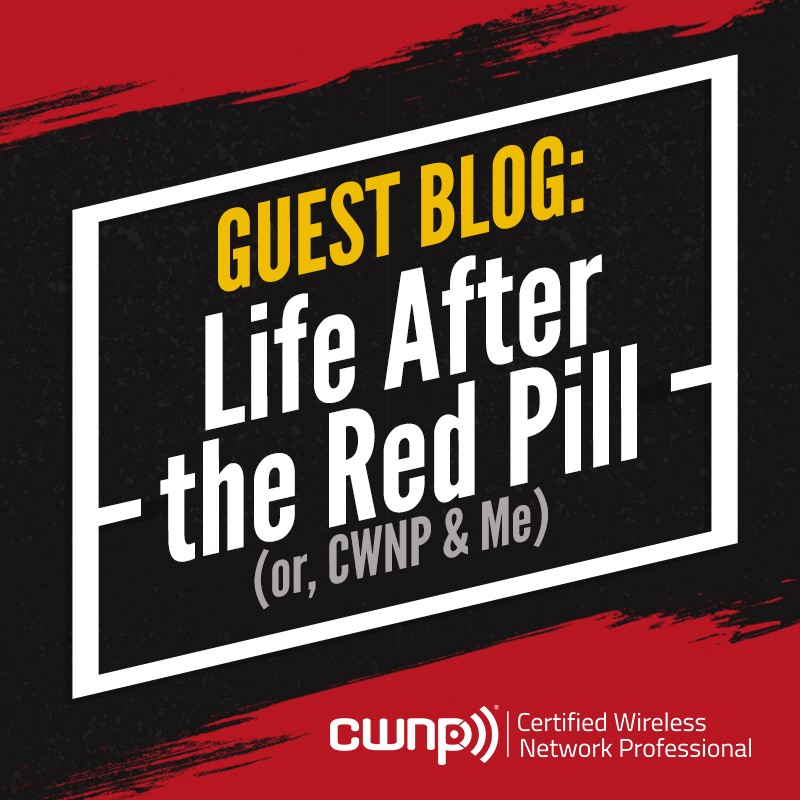 Guest Blog: Life After the Red Pill (or, CWNP & Me)

To start off 2016 I wanted to give you an idea of my life before CWNP (Certified Wireless Network Professional), the benefits I have seen from the program, learning the intricacies of 802.11, and its affect on my business, and customers.

In 2007 I was hired by a large cabling company to start a new voice & data services business. I had been in voice since 1994, installing and maintaining large Nortel PBXs, as well as Windows Server Management (Active Directory, Exchange, ISS, etc.). The cabling company eventually decided they wanted to sell Wi-Fi so they asked me to research various vendors to partner with - and so I did. That was my introduction to wireless.

After deciding on our vendor I proceeded to take the prescribed classes and learned how to "program" their system. There was no discussion of RF in these classes, or encouragement to learn about such things. I got a paper that certified I knew what I was doing - so I figured I actually did. How hard could it be? It did not take long to realize it was pretty hard.

My first deployment was for a large Restaurant/Comedy Club/Event Facility and I "designed" the WLAN the way any normal, intelligent person would - I walk into the facility pointed to where I wanted the APs and marked it on a floorpan. The cabling techs ran the cable mounted the APs and I configured the system as I was taught.

When the inevitable problems arose upon the first event I was on the phone with TAC trying "fix the problem". Clearly their system was not doing what it promised. TAC enabled all various types of features to try to get things working. But, no matter what we did the wireless would fail.

It's only with hindsight, and experience, that I now know that APs don't work well from the concrete room where the sound guy is, or that two APs WILL NOT support 450 people no matter what the manufacturer tells you, or that setting APs to max power is not the answer to bad-fi. But, I digress...

INTO THE GREAT WIDE OPEN

I started my career in wireless in 2007, and then I started my own company in 2009. But, it wasn't until 2012(ish) that I hit the brick wall that set me on the path I now find myself. Because that's when I found a Web site called WLANPros.com, and a man named Keith Parsons, that seemed to know a lot about wireless. He mentioned things like, "RF", and "co-channel interference", and something called, "CWNP". By this time I had begun to think of myself as a wireless guy rather than a Voice, or Server guy and I was intrigued by people who understood wireless. Not my vendor of choice, but wireless - that invisible stuff that had alluded me for so long.

I started reading blogs, and finally making use of Twitter by following people such as Keith, Devin Akin, and Andrew von Nagy, among others. I started realizing just how little I knew about wireless, and how far I was from where I needed to be. And now I had the bug. I had to know wireless and its secrets.

My first step was to call Keith Parsons. I asked him about classes that he taught and told him that I wanted to learn more. He asked me questions that made me extremely uncomfortable, such as: "How do you survey?", "What tools do you use?", "Have you read the CWNA book?", among others. I finished that call knowing that I had left a path of poorly "designed" WLANs in my wake, and that I loved wireless. I purchased the CWNA Study Guide and started reading.

The results were immediate. I called up past customers and told them I would like do a free "wifi cleanup". I would go to their location and correct the wrongs I had done using the information I was learning from the CWNA book. Even relocating APs at my cost! I did this for a while and bought the book for new employees (and customers) so they could learn.

To me, getting the CWNA certification seemed unattainable - never mind CWNE, but in 2013 I signed up for a CWNA class taught by Robert Bartz. There were two things I learned in that class:

I knew stuff! The past few years of reading and correcting my mistakes were really paying off.
I knew nothing, but I wanted to learn more.
In December of 2013 I became a CWNA. I was now part of something I thought was out of my reach - a WLAN Professional.

DOWN THE RABBIT HOLE

"You take the blue pill, the story ends. You wake up in your bed and believe whatever you want to believe. You take the red pill, you stay in wonderland, and I show you how deep the rabbit hole goes."

I was now getting to be known as "that guy who fixes wi-fi". I was being called in to fix, validate, design, because I knew how to get it done right. It was only yesterday that I was on the phone with TAC trying to figure out what button to press, what checkbox to check, to fix everything. Now, with the knowledge I had gained I was "the Fixer". I was "the Architect". I was the "Professional".

Then, at WLPC 2014, I made the decision to try for CWNE. In a year, no less! Sure, I would never make it - that was for the real professionals, but would I learn a lot. So I proceeded to study through the CWNP program.

I started with the CWAP. Packet Analysis was by far a weak point for me, and I knew if I could learn this secret code it could help me in the field. So, I bought the book and started reading. Within a few weeks I was at a Community College troubleshooting an issue with new HP clients not being able to connect to the WLAN, but only at one specific building. No better time than the present, so I open my packet analyzer and started capturing.

I had done my first real-world, wireless packet analysis. And just like Neo, I could see into the Matrix and knew right away, "these client do not support 802.11k", and they didn't like connecting to a WLAN that did. One of the techs had enabled it on the new AP group because he heard, "it does something with roaming". The solution was to simply disable 802.11k and instantly the clients connected.

THE GIST OF IT ALL

That's CWNP to me. It's the Red Pill that let's you see the Matrix for what it is. But, it's not for everyone. Most don't want to travel that far down the rabbit hole and are happy with what the vendors tell them. "Check this box to fix roaming", "toggle that switch to increase your WLAN speeds by 50%", or "our APs are 175% faster than Cisco, Aruba, HP, & Ruckus... COMBINED".

Over the course of the following year I purchased the CWDP and CWSP and started reading those as well. My goal was now to run the gauntlet by WLPC 2015 in Dallas. In December 2014 I took another class with Robert Bartz and got my CWAP. Through January 2015, I self-studied for, took, and passed the CWDP and CWSP exams.

I had done it. What I thought was impossible for me - passing all the CWNP exams - was a reality. Thanks to the help and encouragement of an amazing community of wireless enthusiasts I had done in a year what I thought would take me 3, or 4.

Going through the CWNP program has resulted in a career I never thought I'd have. My customers have reaped the benefits of having someone who understand the fundamentals of why WLANs work, and I have seen the benefits in the growth of my business, and reputation, and a decrease in the Bad-Fi. I owe it all to the WLAN community and CWNP.


0 Responses to Guest Blog: Life After the Red Pill (or, CWNP & Me)