The term industry is most accurately used to reference the activities focused on manufacturing products. When we use the phrases "in industry" or "within industry", we typically mean "in factories and other product assembly or creation environments." The products could be final products for sale to consumers or they could be parts used by other manufacturers to create products from those parts. Some organizations operating within the realm of industry are better thought of as assembly operations. They simply take parts manufactured by other organizations and assemble them to create a final product. Whether assembling parts or manufacturing parts and products from raw materials, all such processes can be defined as industrial and function within the business sector of industry.

This brings us to the second part of our phrase: automation. To automate something is to cause it to occur without human intervention. A human may start the process or the process may be started by another process or device, but once started, the process completes without intervention. I could have simply said that automation is "making a process or system operate automatically," but that's just a bit reciprocal. I feel that the clarity of "without human intervention" is a better way to define the term. To be clear, a multi-step process may look more like this:

In other words, solutions may not be available to fully automate some processes. Enhancements in robotics, artificial intelligence (AI), and human-computer interaction continue to remove the kinds of tasks or operations that cannot be automated. For now, some operations, whether due to safety concerns or expense, continue to be performed manually or with computer assistance by humans.

When considering how computer systems can be used in automation, the model, aptly named "Roles of Computer" in the 1978 paper by Sheridan and Verplank, is a useful place to start. Their model is depicted by the following image (read the entire paper here: https://apps.dtic.mil/dtic/tr/fulltext/u2/a057655.pdf): 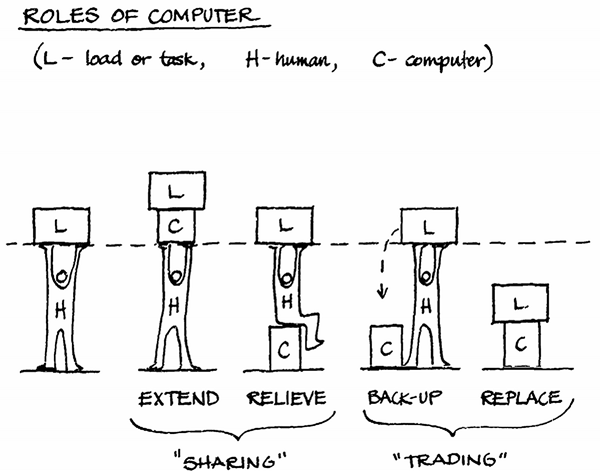 The indication of the sketch is that a computer can be used to impact the load on humans in several ways:

Therefore, one can think of industrial automation in different levels ranging from no automation to full automation, passing through extension, relief, and backup along the way. The authors further categorize backup and replace as "trading" as a clarification that these two models trade a computer system for a human. The extend and relieve models are categorized as "sharing" as they implement a computer system alongside the human.

In IIoT, many implementations are related to providing one or more of these levels of automation. For example, an IoT device that resides in a harsh environment to humans could gather data from with sensors and pass that information back to a monitoring solution observed by a human. This implementation effectively extends the human's reach into that harsh area. Additionally, when IoT sensors are used through a plant and send their monitoring data back to a central dashboard, it removes the requirement of the human to go to each location and read analog meters to ensure safe operations. This implementation effectively extends and relieves the human of partial workloads.

Now that you have a basic understanding of the phrase industrial automation, you are ready to explore specific systems and concepts in later parts within this series on industrial networking and automation terminology.