In this second part of the Industrial Network and Automation: Terminology series, we will look at sensors and actuators to understand the role they play in automation.

Throughout life, we have learned about the five senses: seeing, hearing, smelling, tasting, and touching. Using these senses, we can experience the world around us. We can see the beauty of a sunny day. We can hear the melodic sounds of music. We can smell that delicious dinner just before we taste it and we can touch a newborn baby's cheek or the soft fur of a kitten. These experiences make up our lives and add the ability to interact with our world.

In much the same way now, computer systems can experience the world through the senses of sight, hearing, feeling, and other senses that are not even available naturally to us as humans. They accomplish this action using sensors. Sensors have been around for many years, with some of the earliest designed nearly a century ago. However, the significant introduction of networked computing devices with sensing abilities has changed everything. This change is delivered today in wireless sensor networks (WSNs) or simply sensor networks (when wired links are used).

A sensor is a device that can perceive varying states related to the physical world. Sensors are implemented through the natural responses of particular elements, like metals and other components, to changes in state. For example, metals will introduce a slightly different resistance when bent as compared to being straight. This difference is used in many strain gages to detect the slightest bend in the metal and therefore the object (like a wall) to which the sensor is attached.

Connected sensors and actuators are sometimes called cyber-physical devices. Collections of these devices and the entire solution, including monitoring and control, are sometimes called cyber-physical systems. A cyber-physical system (CPS) is an orchestration of computers, machines, and people working together to achieve goals using computation, communications, and control (CCC) technologies. Although the term CPS was coined only in 2006 by Helen Gill of the National Science Foundation (NSF), the CCC core technologies of CPS have had a rich and long history. Significant milestones for CPS include control theory in 1868, wireless telegraphy in 1903, cybernetics feedback in 1948, embedded systems in 1961, software engineering in 1968, and ubiquitous computing in 1988 (Hausi A. Müller, The Rise of Intelligent Cyber-Physical Systems, ComputingEdge, October 2018).

A WSN is a collection of wirelessly networked sensor devices, effectively forming a core component of a CPS. These devices may connect to the network through direct connections to access points, through ad-hoc networks, through mesh networks, or even through LTE or 5G networks. WSNs are often considered a subset of the Internet of Things (IoT). Indeed, not all IoT devices are sensors, but sensors, particularly those reporting to a central cloud, may be IoT devices. It is very common to discuss Industrial IoT (IIoT) as a concept without ever using the phrase wireless sensor network even though many IIoT implementations are indeed WSNs connected to the cloud. At the same time, it is essential to realize that the WSN is the local network of sensor devices that may or may not participate in a complete IIoT solution.

For example, with your sense of touch, you may determine that a surface is hot enough that it will cause you harm. That is sensing and sensing alone. However, you also have the ability to actuate a change in response to the sensed stimulus. You can quickly move your hand away from the hot surface. Your sense of touch has actuated your movement away from the heat.

In a WSAN, an actuator may cause an item to move from an area that may cause it damage, change the thermostat settings to reduce or increase the temperature in an area, or stop a conveyor belt when human danger is detected. The key is to understand that actuators can take actions in the real world. 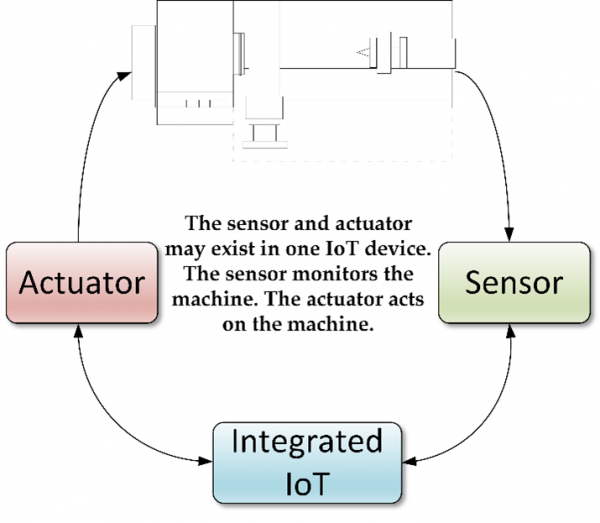 In the next part of this series, we will discuss systems used to manage sensors, actuators, and other IoT devices from past and current use, such as SCADA and DCS solutions.