More Features and Products from Meraki

More Features and Products from Meraki

Meraki is at that weird stage in a tech start-up’s life where it becomes hugely critical to grow sales, differentiate the products, and gain greater industry recognition. They seem to be meeting that challenge in stride with what seems like an unending series of new hardware and software product announcements. To quote Mr. Vanilla Ice, “Will they ever stop? Yo, I don’t know.” I bet their engineers are tired, though (rhyming unintentional).

New Triple Stream AP: MR24
Meraki steps out as the first second (see blog comments to understand correction) vendor who is ready to target the enterprise by shipping triple stream APs. In numerical 802.11n speak, that’s 3x3:3 MIMO. Most enterprise APs today are 3x3:2, maxing out at 300 Mbps for each radio. With three spatial streams, that data rate ceiling has been raised to 450 Mbps. But, just because the AP theoretically supports three spatial streams and 450 Mbps, actualizing those gains is another story. What is Meraki doing about that?

For example, think back to when MIMO APs were first released. They were all indoor APs. Indoor environments provide greater signal reflectivity, which provides greater signal distinction, allowing the gains of multiple spatial streams to be more easily realized. However, take that AP outside in a line of sight environment and suddenly your signal differentiation at the receiver is gone, so it can only reliably use a single spatial stream, which is half the throughput—that is, until vendors released dual-polarized outdoor APs. So, to really take advantage of three spatial streams, you must be able to produce signal orthogonality x3. I asked Meraki how they intend to achieve that goal, and part of the answer includes this picture. 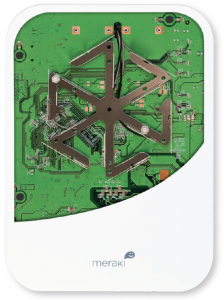 The engineering jargon to pair with the image is that each antenna is elliptically polarized and spaced at 60 degree intervals from one another to maximize cross-polarization and isolation. What’s that mean? I’m not an antenna engineer (understatement alert), but the easy answer is that Meraki has implemented a new antenna system that maximizes signal differentiation, enhancing the likelihood of experiencing three spatial streams.

Surely many more triple stream APs are funneling down vendor queues soon, and as they come, we’ll see many more new antenna systems like this. Some will be better than others, but make no mistake that ordinary dipole antennas will become less common on high-end APs. Meraki is leading that charge with the MR24 (List $1199).

Meraki Teleworker VPN
In addition to a new triple stream AP, Meraki has also announced a teleworker VPN solution for their APs. They’re leveraging the deployment simplicity of their existing cloud solution to make this a “zero-touch provisioning” VPN. APs phone home to the controller (automatically), receive their VPN configuration directly from the cloud controller (automatically), and can then build the tunnel to the corporate data center or HQ office without admin intervention (automatically). It seems like the natural evolution of cloud-managed networking, and a nice use of Meraki’s existing assets.  The headquartered VPN concentrator will be a VMware image, keeping hardware cost and maintenance to a minimum.

Meraki Built-In NAC
Finally, Meraki has announced what seems to me to be NAC-lite. They’ve announced a custom integrated NAC feature in their APs and routers for software antivirus detection on client devices. Instead of requiring cumbersome-to-manage-and-deploy client agents, Meraki’s NAC uses a custom Java applet that launches and runs on client stations (through a web browser redirect and end-user acceptance) to detect the presence of antivirus or endpoint software packages from a list of supported software. I say it looks like NAC-lite because today it is focused solely on antivirus software detection and lacks more sophisticated insight into the OS, software patches, firewall settings, etc. Future developments will likely expand into these areas, but antivirus software will catch many of the most pesky client boogers and is a good place to start.

Meraki engineers, tell your slave driving managers that you need some rest.  :)  You’ve had a nice burst of product updates. Keep up the good work!


0 Responses to More Features and Products from Meraki