A few myths that seem to permeate the WLAN world. Caution, this may be controversial!

This is false. RF signals travel the same distance regardless of frequency. On the surface it does appear that lower frequencies travel further but why?
I think the misunderstanding is that the frequency itself is the reason it doesn't travel as far. But think about it, extremely high frequency gamma rays with a frequency of around 1020 Hz (wavelength of 1 nanometer) travel billions of miles, light years even, from neutron stars and pulsars all the way to us here on earth. What it comes down to is attenuation. In free space, there is no medium of which a radio wave gets attenuated so therefore it travels equally in distance regardless of frequency. But here on earth and in the real world where there are objects and obstructions, longer wavelengths have the advantage of attenuating less which makes them appear as if they go farther than higher frequencies. But it's really the medium of which radio wave must go through that determines how much it is absorbed and attenuated – which then determines how far it goes (or should I say, still heard). Longer wavelengths have less numbers of their "wavelengths" to get through an object and therefore are less absorbed, their signal is less degraded, and therefore appear to go further.

Here's an anomaly and case in point. In the 2-way radio world, it is commonly known that UHF (450-470MHz) frequencies do better than VHF (150MHz) in an indoor environment. How could this be? Well, the wavelength for VHF is approx. 6 feet while UHF is approx. 2 feet. In buildings, the windows, doors, openings etc. are larger on average than the UHF wavelength is but are on average smaller than the VHF wavelength is. In this case, the amount of total attenuation is actually less with UHF. Interestingly, if you continue to go higher in frequency (i.e. 900MHz), an even shorter wavelength puts you back at attenuation increasing again because although the openings are further increased a bit from the wavelengths perspective, everything else (all the other non-openings if you will) are attenuating the signal more. It turns out UHF 450MHz is the sweet spot. And to cover what someone may point out that UHF radios have higher gain antennas than VHF (which is true), the dB gain difference isn't enough to resolve the explanation of why UHF does so much better indoors.

When using a FSPL calculator, it assumes as you lower the frequency, you are also maintaining the same wavelength-proportionally sized antenna. In essence, you are only changing one variable (frequency, not antenna size). When changing the frequency to a lower frequency, you aren't seeing the fact that the antenna is getting bigger and bigger at the same time. But if you were to decrease the frequency while NOT increasing the size of the antenna, then dB gain would decrease accordingly and the overall system gain would stay the same.

See the example below where I adjust both frequency and antenna size (gain -3dB). FSPL is the same! 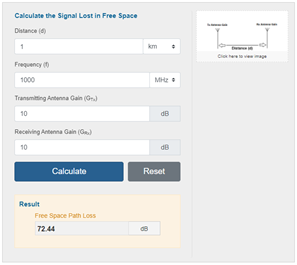 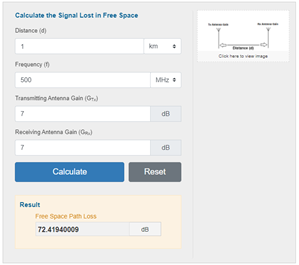 Hear me out! I'm not saying to turn up your AP's to 28dBm but what I am saying is there is this misnomer that you must match AP to client power, or that increasing power is never a solution. For one, the AP's receiver is usually better than a client device. Couple that with MRC (maximal ratio combining) and you can easily allow for at least 3dB better RX which can mean 3dB more AP TX to balance the system. Another thing commonly overlooked is that it is OKAY to have asymmetrical MCS rates (higher downstream) than upstream. Typical WLAN networks have clients downloading more than uploading. With a higher average MCS rates to clients, they will be on and off the wireless medium quicker, thus increasing performance of the network. It's often fine to have AP power around 15-17dBm or even a little more in some cases. Devices still roam okay while keeping co-channel interference in mind of course. This isn't to say that this is a solution to a poor design or obvious coverage holes, but don't be afraid to turn up the power a few decibels. And for Point-to-Point links, increasing power is certainly one of the easiest ways to increase performance. Also think Mesh backhaul links between AP's - if they are higher power, the average MCS rates to each other will be higher. Of course, one must take care not to create more co-channel interference and be a good neighbor etc. but you get the point.

Myth #5 – Doubling the RF bandwidth will double your throughput

Not always! Although the PHY rate may double (which may look really nice), the actual throughput is not likely to double. Remember, narrowing the channel width by half increases SNR (lower noise floor) by 3dB and possibly more if there are other sources of interference. A 3dB improvement in SNR typically results in a jump of 1 to 2 MCS rates. And the reverse is true, doubling the RF bandwidth reduces the SNR by 3dB. This 3dB reduction in SNR can often reduce the average MCS rates by 1 or 2. This means you don't always double the throughput when doubling the RF bandwidth but likely, on average, somewhere in-between. Only if the link is so strong, with so much extra SNR beyond what is needed for the maximum MCS rate that – full MCS rates are maintained either way and throughput doubled.
Case in point, I had an outdoor PtP application where I reduced the RF bandwidth from 40MHz down to 20MHz and the throughput actually went up! Narrowing the RF bandwidth increased the SNR and reduced apparent interference. This increased the MCS rate of the link so much so that it more than made up for the lost throughput from narrowing the RF bandwidth.