To date, three enterprise vendors (Aruba, HP, Meraki) have announced new three spatial stream APs (3x3:3), and others will follow. The progress of three spatial streams looks really good on paper, where our maximum throughput increases by 50%. It’s a marketing dream come true. But, what’s the reality? What are the real-world gains, and how important is the third spatial stream?

If you pose those questions to the three vendors currently offering the products, you may get a response that adamantly favors three spatial streams. If you ask a competitor, its significance may be downplayed a bit.

Functional Range
Spatial multiplexing is an RF technology performed in the baseband and radio chipset, then transmitted onto the wireless medium (WM). For it to work properly, the wireless channel between the transmitter and receiver must be “clean” and each of the spatial streams (SSs) must be received properly or the SS combination process at the receiver will be error laden. Each additional spatial stream increases the RF complexity and likelihood of errors, requiring greater SNR and signal diversity at the receiver for reliable use. This is a significant limitation. 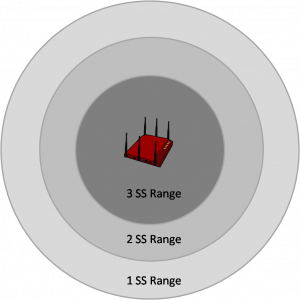 Client Device Considerations
With such a diverse set of client devices in the enterprise today, it is not surprising that many devices do not yet support three spatial streams. Many mobile devices are not even 802.11n, and many others are still only a single spatial stream. The client device engineering process requires tradeoffs between competing needs:

Similar to the classic maxim, choose two. :) Performance is often the area of greatest compromise.
Even though there are very few clients that support three spatial streams today, many more will support it in the months and years to come. In the enterprise WLAN industry, the infrastructure products usually implement the latest features first, especially when they are power-demanding features. Similarly, the infrastructure often reflects a greater cost investment and longer shelf life. With that in mind, the best total-cost of ownership MAY be obtained by choosing the most future proof technologies available today.

Network Utilization
Like any technology, the value of three spatial streams is relative to the business driver for the WLAN. For example, WLANs deployed for cellular offload won’t see any benefit if the client population is comprised of only mobile devices. Similarly, low bandwidth applications, such as those common in warehouse and manufacturing environments, have no need for a third spatial stream. Hospitality is similar, where the WAN is the bottleneck for most guest applications. Conversely, carpeted offices with wire-replacement WLANs will see gains in proportion to the devices (and, again, percentage of traffic) using three spatial streams. Higher education is another vertical with bandwidth-hungry users and moderate (though rising) populations of three SS capable clients. The use case is key.

As we look at the improvements in raw PHY rates, it is important to realize that these data rates are only a small part of WLAN efficiency. The protocol itself accounts for a far greater percentage of overhead than the PHY rate alone. No less, the fact remains that higher PHY rates allow stations to get on and off the wireless medium quicker than devices with lower PHY rates, leaving more airtime for everyone else. Airtime fairness features also become more important as the variance in client connectivity rates continue to grow.

Architecture and Hardware
As manufacturers actualize the gains of 802.11n, we have to continue to evaluate the long-term viability of controller-based architectures with centralized forwarding. Almost all vendors are (or have already) embracing this shift in data plane decentralization. The notable exception thus far is Cisco, whose large customer base and marketing focus is built on centralized data forwarding. But, to stay competitive, they will likely shift as well. I believe that it’s an inevitability for all vendors.

In addition to architecture, AP hardware becomes more important too. With real-world throughput around 230+ Mbps per radio, AP processor and memory components must be adequately designed to apply QoS, firewall, and forwarding policies at the edge (if forwarding is to be done there).

Cost
Triple stream APs are state of the art today and they demand a few hundred dollar list price premium. Most WLANs are not heavily utilized and can get by just fine without three spatial streams. As with anything related to WLAN design, the client applications—current and future—must be factored into the infrastructure selection process. For some, the price premium now may be worth it for longer life and better TCO.

Final Comments and Suggestions (FCS)
Three spatial stream APs are touted by some to be very significant. By others, its importance is poo-poo’d as inconsequential. I find myself right in the middle. If we’re honest, it’s not going to change your Wi-Fi experience in any major way today; but it is yet another helpful checkpoint along the path to wire-replacement. In most environments, the price premium is not and will not be worth it in the foreseeable future. For others, a 50% data rate gain (with range limitations) is significant enough to warrant a second, or first, look.


0 Responses to Three Spatial Streams: The Good, Bad, and Ugly